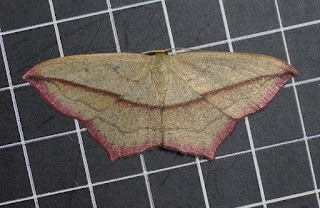 This turned up in the trap this morning. Tony tells me that it is the latest ever county record by 10 days. He also advises that there are normally two generations, but there are some records, particularly in the south of the country, of a partial third generation. The thought is that, as it is pretty fresh, there has been a warm spell lately and it is so much later than former records, it may well be a third generation.
It is only the second record from Llawrcwrt the first being on the Open Day on the 2nd July.