With temperatures forecast to stay in double figures we decided to have one last trapping session at Ynys-hir last night. The temperature this morning was 10 C and we were staggered by the number of moths we had in two 6W Heath traps. We counted over 450 moths and there must have been many more in the surrounding leaf litter. The species we had were: Mottled umber (304), Winter moth (143), Scarce umber (3), Northern winter moth (3), Chestnut (2), Red-green carpet (1), Pale brindled beauty (2), Early grey (1). There are a few county records of Pale brindle beauty in December, the earliest being on the 18th, but the previous earliest county record for Early grey was on the 8th Feb. 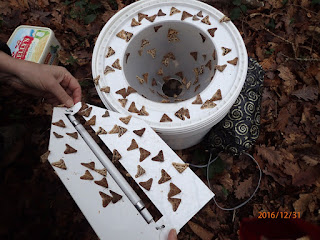 We put two 6W Heath traps in the woodland at Ynys-hir last night. The temperature at 7:30 this morning was 14C and the 2 bucket traps were full of moths with lots more on the outside and surrounding vegetation. We counted 93 December moths, 65 of which were in or on 1 trap. Some of them seemed quite unconcerned at being captured as several pairs were mating. Other species were Mottled umber (88), Scarce umber (23), Feathered thorn (15), November moth agg. (14), Winter moth (24), Northern winter moth (2), Chestnut (1), Yellow-line quaker (3), Red-green carpet (1), and Spruce carpet (1).

Winter moth and Northern winter moth are very similar in appearance, the latter is slightly larger, paler and has whiter hindwings. It is very difficult to get them to pose in a way that shows their hindwing, but between us we managed to get these photos.
Tony & Ina (3 micros chilling out in the fridge for later)

Not so Scarce Umber 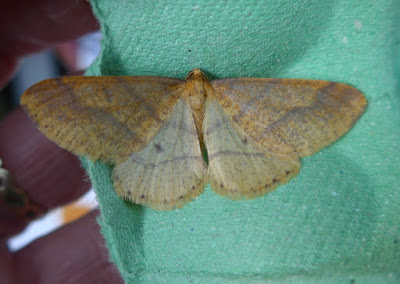 11 of these across 2 traps in Coed Y Bont last night!  8w and 15w actinics. Apologies for quality of pic but it shows the hindwings well.
plus
2 Mottled Umber
11 December moths
1 Chestnut
1 Red Swordgrass

The experimental LED trap was set up at home but had to be put away quick when we had some unexpected rain.
Posted by lizsnell at 11:18 No comments:

Seeing Sarah's earlier report of December Moths, I thought it would be interesting to look at the county records for this species. Below is the graph of number of records per year from 1966 to 2015:

The graph clearly shows the introduction of Ian's RIS trap in 1976, at which the numbers have declined a little in the past 40 years. It also shows the increased interest in year-round moth recording when the moth group was formed in 2009. Prior to that we had numbers of lepidopterists visiting Ceredigion, but mostly in the warmer months and hence few records for December moth.