Pete Skinner found this moth yesterday morning resting on the wooden wall of an old shed just above the trap at his home near New Quay. This is the first record for VC46 although it is locally distributed along the coast of south Wales. We have established that no one living near to Pete had been south and accidently transported it back. The area contains some old buildings and stone walls and Cae Bach beach nearby used to have two lime kilns. It is likely that the moth could be moving north due to climate change, so watch out for it along the west coast. 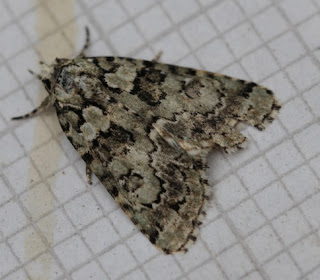 Tony
Posted by Ceredigion Moths at 09:06