Tony and I assisted in two Biobliz in the county, Friday at Ynys-hir and Saturday at New Quay.
On Friday there were plenty of people out collecting and counting as many species as they could.
We were doing the 2pm Dragonfly Walk... well, to say we have had no rain in the county for weeks it managed to rain at 2pm on Friday!!  So not many Dragons about although we did manage to see 2 Small Red Damselflies among others.

New Quay was all moths for us.  Two traps; one in Jason Burk's garden - he is one of the volunteers at Cardigan Bay Marine Wildlife Centre where the Bioblitz was based for the day and an excellent photographer too, see below. The other belonged to Pete Skinner and had the largest catch of the night.

The object of the Bioblitz is to raise awareness of the plight of wildlife and the countryside in general.  Chris's team were handing out postcards to send to the Minister in charge in the countries he is visiting which in our case is Hannah Blythyn AM.  Please see the photo below of one of these and consider adding your name to a letter or postcard.  You could also write to our MP for Ceredigion at Westminster, Ben Lake. 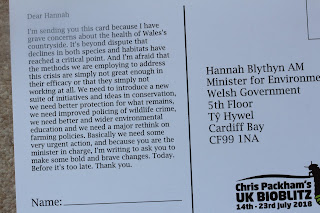