Moths from the bog

I also tried to make the most of the hot weather earlier in the week, with only partial success. Trapping just outside Llanbadarn on Sunday night went well, with almost 70 species, though not more than ten of anything. Highlights included Phoenix, Drinker, Limnaecia phragmitella, Rush Veneer, Water Veneer and Pammene aurana.

The next evening I went to Borth Bog at dusk, but rather few of the bog specialists: Southern Wainscot, Round-winged Muslin, Chevron, and Chilo phragmitella. The garden trap did better, with more than 70 species including Marsh Oblique-barred and Four-dotted Footman. So perhaps I should have stayed at home! Two days later, a Round-winged Muslin in the garden trap, one of fewer than 30 species. 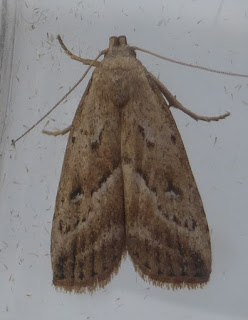