There are only 40 records for this moth in Ceredigion, only 2 since 1992, one in 2010 and the the other in 2014 from Ynys-las and New Quay respectively. This species is not reported as being in decline so it is a bit of a puzzle as to why we are not catching more of them. This one was caught inland from Aberporth last weekend by Ruth Harding. 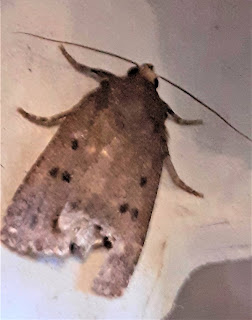