Another rare and spectacular moth has been found in Ceredigion. This is only the 13th county record for Death's-head Hawk-moth. It is the first live specimen recorded since 1983, although a dead one was found under a bee hive in 2015.  Thanks to Phil Evans, warden at Ynyslas nature reserve, for spotting it and for the photographs below.
We were very excited when we were told that this moth was sitting on a fence post in the dunes at Ynyslas. We abandoned everything at home and headed for the dunes. Luckily it was still there when we arrived. We tried to move it a little for photography and were threatened with raised front legs and a quite loud squeak, what a thrill.
Tony & Ina 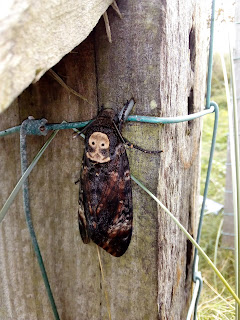 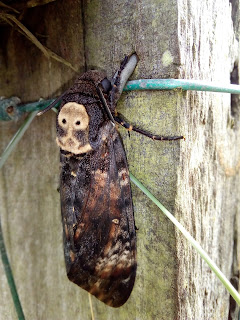