Betty Loyn recorded six macro species in woodland near Bont Goch, including an Anomolous and this Flounced chestnut. 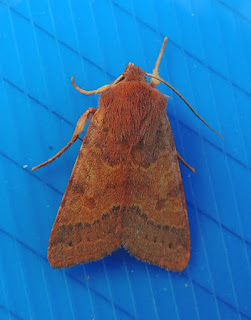 Flounced chestnut were recorded in low numbers up to 1988 but then there were very few records until 2010 when there was 1 record at Cwmere, which is not far from Betty's woodland. Since then the number of records has increased with 9 in 2013 and 4 last year. Hopefully they will maintain an upward trend.