I have been absent from the postings on here this year so having moved into the south of the County I thought I had better make an effort.
Unfortunately I seem to have chosen a very windy spot but Tuesday evening was calm so the 60w Actinic was given an outing and I managed 12 moths of 5 species amongst which was this very well coloured March Moth.
Small beer compared to the catches some of you have had during the false Spring in Feb but pretty enough to warrant a pic particularly as it kindly opened its wings. 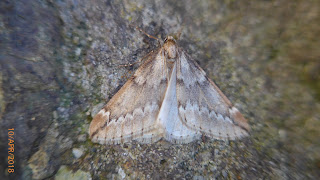