Twenty three macro and seven micro plus two still to be determined on a warm night in the dunes.
The local population of Green Carpet is not in danger as we had 104 in the trap plus dozens that flew off before they could be counted when I fell down a hole while carrying the trap!
Eight Lime-speck Pugs were very nice to see, by far my favourite Pug...mainly because it never gives you a headache wondering what species it is!!
Feathered Gothic, Archer's Dart and Mullein Wave also featured.
We also had a wandering Marsh Oblique-barred, this dispersion technique is something they do on very warm nights as proved in the past by being found miles from any suitable habitat.  So, if anyone out there is wondering what that triangular shaped micro is that they have had recently... it may well be you are looking in the wrong book. ;-) 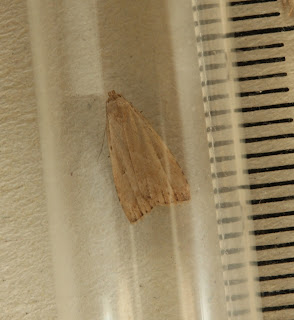