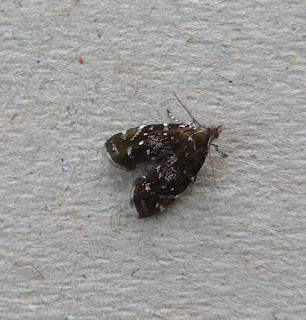 This turned up in my trap on Aug 24th and I took notice because I like Nettle taps and this one was small and very bright.  Peter Hall very kindly did the deed and confirmed that it was this one and not sehestediana which has been found once before in Cere I think.
There is some skullcap down on the bog only 500m away so I'm lucky it came up to my trap instead of Tillo's Roth trap close by…though it unfortunately shared the same fate anyway.

Apparently there has been a late blooming of Anthophila fabriciana in Somerset with large numbers seen recently. I saw one a few days ago on ragwort down at the Llanon beach carpark but it wasn't as pretty as this.
Posted by lizsnell at 21:23