Matthew Cock recorded this Mottled Grey which was attracted to his house lights in Llanon last night. Their normal flight period is March and April but they appear to be emerging earlier each year. There are a good number of county records in February and a few in January. Ina recorded one on 4th January last year which was the earliest county record at the time, but Matthew has seen them in December last year as well as the one this year.
Tony 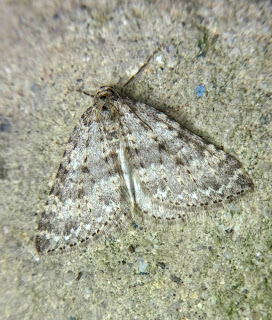