We were a bit disappointed to find the heavy drizzle at Ynys-hir this morning, but it was all worth it with 50 macro species plus a few escapees. The star was a first for both of us, an Orange Footman, only the third county record, the others being at Bontgoch in 2001 and Tregaron in 2007. With a wing length of 13mm and looking rather faded it looked like a small Buff Footman! The other special was a Dog's Tooth, only the 22nd county record with all but one from the Dyfi area, mostly Ynys-hir. Other firsts for us this year were Lunar Thorn, Elephant Hawk-moth, Coronet, Sandy Carpet, Grey Pine Carpet, Gold Spot and Marbled minor.
Tony & Ina 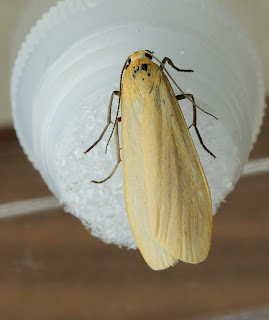 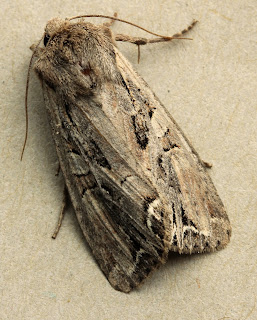