This little moth appeared in south Ceredigion in 2013 - a second was found the year after a little further north but as two more have been found in the last few days at Llanon and Bow Street I thought I should ask people to keep an eye out for something that, on first appearances, looks like a large Diamond-back.
Most regular moth-ers will I am sure recognise that it is something a little different but to give you an idea here is a photo of the first - a female, and one of the more recent - the dead one. 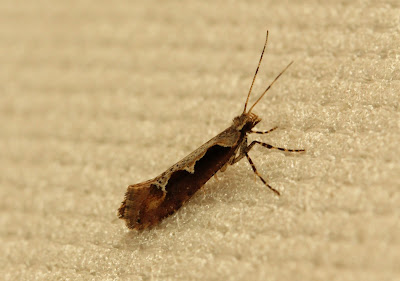