We enjoyed the company of a visiting moth-er from South Wales as 'guest' identifier at Ynys-hir on Sunday.  Thanks to Paul Parsons from coming along and entertaining us. We also met a new 'recruit' to the Ceredigion moth group from Cross Inn, which if you read one of the previous posts you will see is one of the least recorded 10k squares, but maybe not for long.
Tony went along to join the campers from the RSPB big wild sleep-out and had a number of very excited children going through the moths with him.  This included one little girl that was determined to take some eggs (moth) home and try to rear them through.  I hope she succeeds and becomes a moth-er of the future!  The moths that created the most excitement were two large Northern Eggars - big enough to cuddle!
The moth pictured below had us all fooled for a while and in the midst of emptying/recording the catch it was not looked at properly until later.
This is the darkest Crescent any of us had seen...but maybe some of you out there have had one similar?
Ina 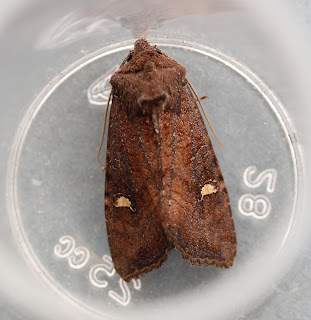