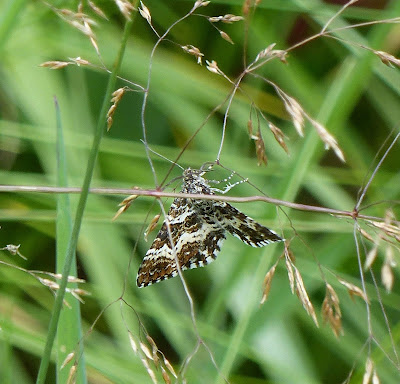 Presumably a second generation moth along the forestry track above Tyn Y Graig (Mynydd bach forest).  Its quite high, 371m at the trig point, where the track goes just below it and has edge vegetation of heather, bilberry, tormentil and bedstraws.
Its ironic that the gaps in the forestry now present glimpses of the habitat which would have been on the hills before the sheep plague; at the time we all thought afforestation was the end of the world.  I can't envisage what unexpectedly beneficial side effects there might be to the creation of vast sheep lawns.
Pic below is of 'improved' grassland above Soar Y Mynydd where I saw 1x Sm A&S in early June on a remnant patch of bedstraw along the track to Tyn Cornel. You can't see the huge amount of subsidised fencing which now nets this moorland. 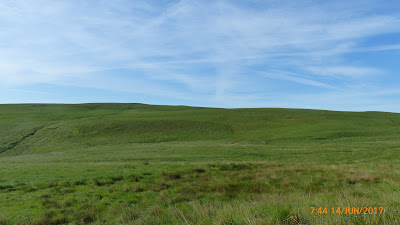